What’s Next in Brexit Saga Now that May’s Deal is Off the Table?

by Ben Williams
in Opinion

The nature of the parliamentary defeat for Theresa May’s proposed Brexit deal (by 230 votes) is unprecedented. Not since the 1920s has a U.K. government suffered a rejection of one of its policies on such an extreme scale in the House of Commons lower house.

The sense of shock at this episode stems from the high-stakes issue involved, and also because unlike the U.S. political system, in British politics the executive typically has majority control of the legislature. Even on the rare occasions that they don’t, they can usually negotiate the support of sympathetic smaller parties to get important bills passed into law.

Not having outright control of Parliament has become familiar territory for Theresa May, as this has been the scenario she has faced since the 2017 general election when she failed to secure a clear parliamentary majority. She consequently made a deal to secure the support of the 10 Democratic Unionist Party (DUP) MPs from Northern Ireland, and this has provided her with a “working majority” to get most of her legislative business through Parliament over the past 18 months.

However, her apparent capacity to manage such challenging political circumstances was shattered by the nature of this excessive and high-profile Brexit-related defeat. Such a development can, therefore, be viewed as a humiliating personal and political setback for the prime minister, with over 100 of her own MPs and all of the DUP’s parliamentarians failing to support her in this landmark vote. 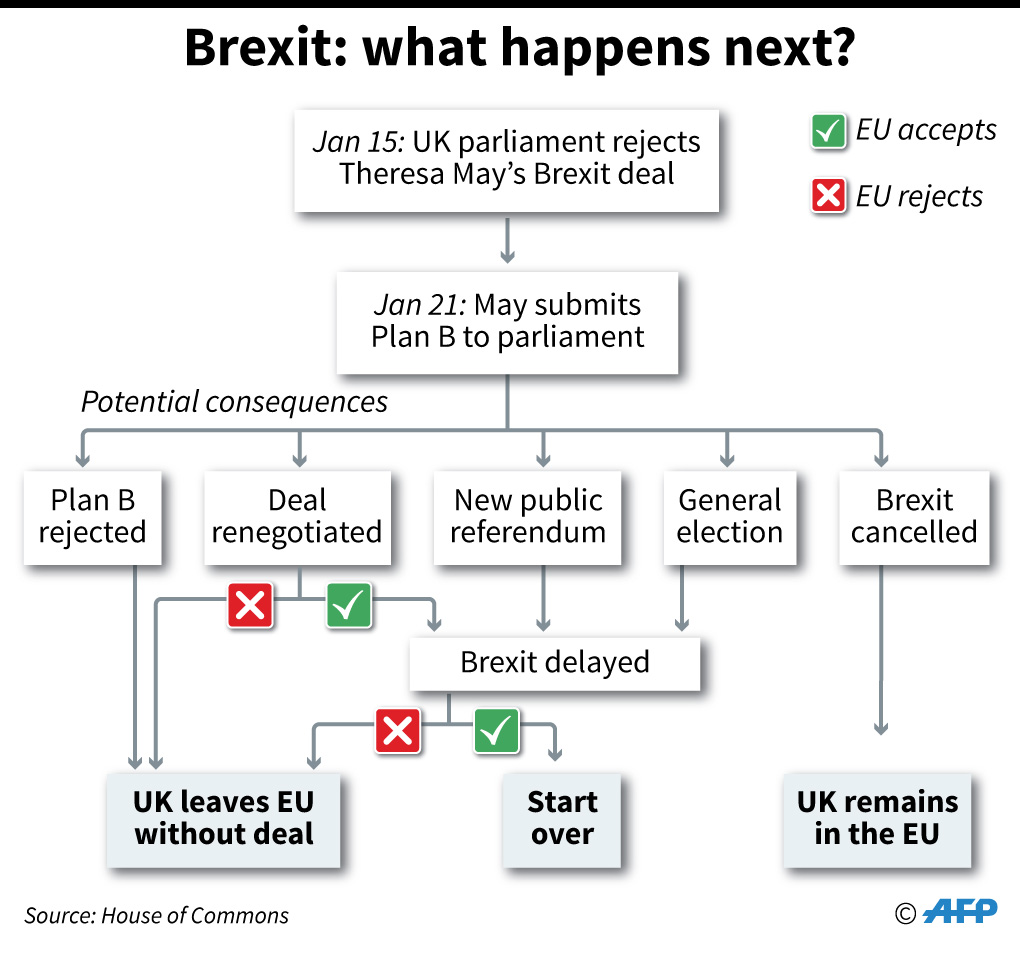 The warning signs of such stubborn opposition to May’s Brexit policy direction have been evident for some time, and even though she delayed the timing of this crucial debate until after Christmas to supposedly win over critics, it appeared to make little or no difference to the eventual outcome.

Indeed, the extent of the vote against her proposals to leave the E.U. surprised many observers and political commentators in terms of how high it actually was. This suggests that opposition to it has been hardening rather than softening since it was publicly announced last November, and those who opposed it were from both the anti-Brexit and pro-Brexit wings of her Conservative Party.

Some critics have subsequently accused the prime minister of putting party politics before the national interest and wasting crucial time in the process, particularly as the March 29 departure date for Brexit draws nearer.

Based on comparable government setbacks in British political history, a rejection of this nature would typically signal the end of the career of most prime ministers. However, these are currently unique, unpredictable, and unprecedented times in British politics.

Within this context, the overwhelming rejection of her Brexit deal doesn’t automatically mean the end of Theresa May’s premiership, and she has a track record for displaying significant powers of durability in the wake of previous setbacks. May has already survived the unexpected loss of Conservative seats at the 2017 general election, although criticism and pressure on her grew in the wake of this major disappointment.

Nevertheless, her position has since been further protected when she overcame an internal challenge to her party leadership by some of her own Conservative MPs last month. This means that there cannot be a further formal Conservative leadership contest until December 2019. She has been relatively stabilized since and bolstered further by the stark divisions within her Cabinet, her parliamentary party, the broader House of Commons, and the main opposition Labour Party.

For its part, Jeremy Corbyn’s Labour is not convincing sufficient numbers of voters that it could offer a better deal, and in the process is struggling to “sing from the same hymn sheet,” with some Labour MPs prioritizing demands for a general election to resolve the Brexit deadlock, with others forcefully arguing for a second referendum or “people’s vote.”

These widespread splits at the senior political level are consequently further reflected in an increasingly polarized British population. Ultimately, there is no obvious rival contender capable of offering a credible and coherent alternative, which on a practical level means that Theresa May currently retains her position in 10 Downing Street by default.

Vote of No Confidence

To add to May’s recent woes, the very next day following her record parliamentary defeat, her stumbling government was faced with a formal vote of no confidence tabled by the Labour Party. This was seemingly part of a strategy to maintain the momentum of political pressure on the embattled prime minister, yet such methods are rarely successful. The last time a government was ousted after a vote of confidence was in 1979.

May consequently won the confidence motion fairly comfortable as predicted by 19 votes (325-306), for the fundamental reason that none of her internal Conservative critics want a general election when it is not constitutionally required until 2022. Results of a general election would be uncertain and unpredictable, which could result in some of her MPs losing their parliamentary seats, and could even put the entire Brexit process in jeopardy.

Neither does the DUP for that matter, the minority partners of the Conservatives who have been vocal about their fears of a left-wing Jeremy Corbyn-led Labour administration. While the outcome of this vote of confidence marked a positive about-turn from the previous evening, it did little to resolve how to take the Brexit process forward.

As the deadline for E.U. departure beckons, various options lie ahead. A hard or soft Brexit, a No Deal Brexit, a second referendum, a delayed Brexit, and a further general election are all possible outcomes.

The British Parliament is fractured and May survives at least in the short-term. In the aftermath of her record defeat, she has offered “olive branches” to opposition politicians as she pursues a more bipartisan approach.

Yet she remains vulnerable, and a well-organized Cabinet “coup” could be the mechanism that finally removes her from office. If this happens, the emergence of a new prime minister would add yet another destabilizing layer to the ongoing Brexit saga.

Beyond Compromise: Government Shutdown Reveals US Politics at Crossroads