by Luis Martínez-Fernández
in Opinion

Why does U.S. Senator and 2020 presidential candidate Bernie Sanders hold on to the socialist label when so few people know what it means, and so many are repelled by the term? Should he discard it?

Socialism, like many words, means different things to different people in different places, at different times. Karl Marx defined it as an intermediate stage in the process of building a communist society, where a purportedly worker-run state would own all of the means of production (such as factories, warehouses, and croplands) and take care of all the population’s needs.

In Europe, socialism means a capitalist system in which a democratic state taxes and regulates private corporations to limit their excesses, to keep them from exploiting workers, to protect consumers and the environment. Such societies recognize that private corporations are better at making cars and selling TV sets and governments are better at providing basic services like education and healthcare.

In the United States, those who hold positive views of socialism accept the democratic European definition, as in Scandinavian countries, Francois Mitterrand’s France, and Canada. Only a trivial minority of Americans sympathize with, let alone embrace, anything that remotely approximates Marxist socialism.

For a substantial proportion of those who hold negative views of socialism, Republicans in particular, the term conjures images of Soviet or Cuban despotism, violence against dissidents, and generalized misery. Marx, Vladimir Lenin, Mao Zedong, Che Guevara, and Fidel Castro are mere ghosts, however, in a world in which only the dictatorial side of communism survives and where oligarchic and state capitalism thrives.

A 2015 Gallup poll demonstrated how unpopular socialism was among U.S. voters. Participants were given a list of eleven racial, religious, and ideological characteristics and were asked if they would vote for presidential candidates with any of those traits (Jewish, atheist, black, Catholic, gay or lesbian, woman, Mormon, Hispanic, Muslim, socialist, and Evangelical Christian).

Between 91 and 93 percent of respondents said that they would vote for a candidate that was Catholic, Jewish, a woman, Hispanic, or black. The only category below 50 percent acceptance was socialist. With 47 percent it ranked as the least desirable among all ages and party affiliations, under atheist (58 percent) and Muslim (60 percent).

The poll reflected that for the first time, Democrats/leaning viewed socialism more favorably than capitalism, mostly the result of sharp fall in favorability of capitalism from 56 percent in 2016 to 47 percent in 2018.

President Donald J. Trump and other Republican politicians are astutely taking advantage of Senator Sanders and Congresswoman Alexandria Ocasio-Cortez’s socialist self-labeling, painting them as extremists and Marxist socialists who want to destroy capitalism. That is “fake news.” Rather than seeking the destruction of capitalism, Sanders and Ocasio-Cortez want to make it fair and work for all, not just the top 2 or 10 percent.

The democratic socialist label is becoming toxic also among progressive Democratic presidential candidates and potential candidates, who know very well what Sanders and Ocasio-Cortez mean by that term. In recent days, Congressman Beto O’Rourke described himself as a capitalist; Senator Kamala Harris, who is further to his left, categorically denied that she is a democratic socialist; even Senator Elizabeth Warren proudly proclaimed “I am a capitalist to my bones.”

The extremism is actually on the others side of the political spectrum, among those who promote and seek what Professor Robert Reich called supercapitalism: a brutal, unethical, and corrupt get-out-of my-way form of capitalism, that instead of promoting the much-hailed doctrine of free-market competition seeks to crush competition with the establishment of monopolies and crony capitalism.

This radical brand of capitalism, short of amiable to democracy, thrives on the destruction of representative democracy. Russia and China are cases in point. It is not a coincidence that in the United States voter suppression and other threats to democracy have spiked parallel to the rise of extreme capitalism. 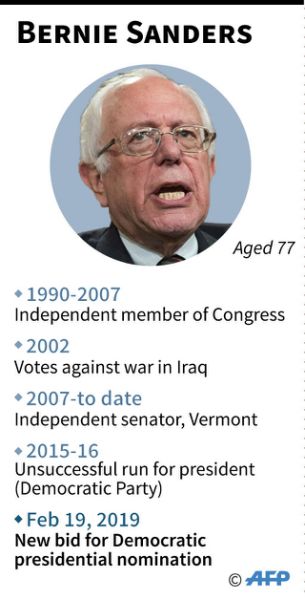 At the risk of being labeled a communist, Marx may have been onto something when he said that capitalism contained the seeds of its own destruction. What an irony that supercapitalists seem to be destroying what Franklin D. Roosevelt himself derided as a socialist saved from a fatal implosion. Eight decades later, Barack Obama, also scorned as a socialist, took effective measures to keep the global financial system from blowing into pieces.

What should Senator Sanders do? He should continue to push for democratic socialist ideas, ideas that, by the way, are becoming mainstream democratic agendas, even among those who refuse that label.

He should not follow the expedient rebranding steps of most democratic politicians who, beginning in the 1990s, ran from the liberal label, so proudly worn by Roosevelt, John F. Kennedy, and even Jimmy Carter.

What Sanders must do is unremittingly educate voters about the meaning of democratic socialism, sticking to one clear and succinct definition; and go as far as proclaiming that socialism is the best defense of traditional capitalism, representative democracy, peace, and the environment.

Disclaimer: The views and opinions expressed here are those of the author and do not necessarily reflect the editorial position of The Globe Post.
Share9Tweet

Kim Opens Door to US Presence in Pyongyang at Nuke Talks

Beyond Independence: Democracy is Real Test in Spain's Catalonia Trial