by Frank Stilwell
in Opinion

What are the preconditions for moving from talk to action? Relevant information, effective policy instruments, and the necessary political will stand out as key elements.

There is no lack of relevant information. Excellent data is being regularly published by French political economist Thomas Piketty and his colleagues at World Inequality Lab. A new report from U.K.-based international aid agency Oxfam links key information with a program for action.

Oxfam has a long track record of campaigning in this area, emphasizing the connection between global poverty and economic inequality. Its new report includes some jaw-dropping information. 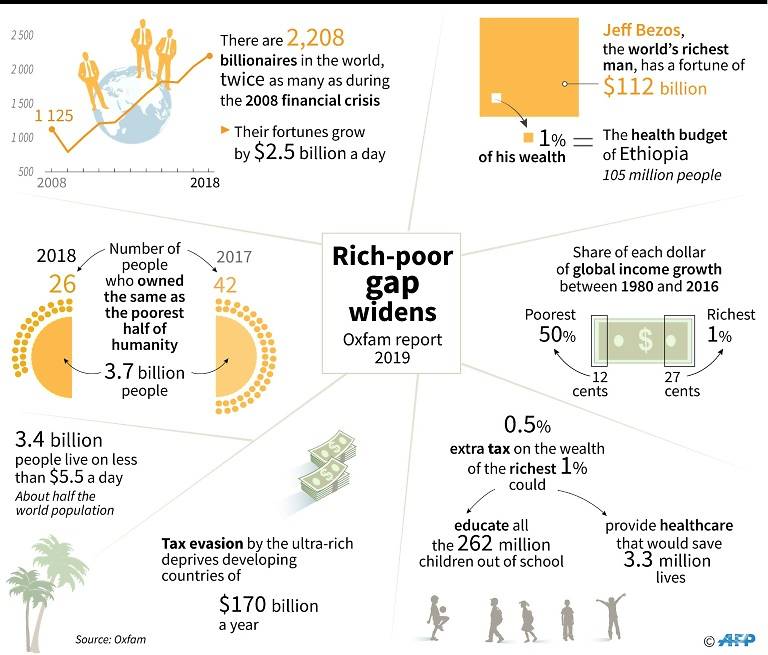 For example, the world’s richest 26 people now own the same amount of wealth as the poorest half of humanity. During 2018, billionaires around the world increased their combined fortunes by a daily average of $2.5 billion. Meanwhile, nearly half of humanity languishes on incomes below $5.50 per day or its equivalent in local spending power. Inequalities according to race and gender are interwoven throughout.

These are the features of a grossly, some would say grotesquely, unequal world.

Does it matter? Some say not, arguing that extreme inequality is a necessary price to be paid for giving “wealth-creators” the necessary “economic freedoms.” Winners in the marketplace prosper, others miss out. Trying to level the playing field would undermine economic incentives, reduce economic growth and lower average living standards.

The Oxfam report points to the flaws in this conservative complacency. It cites the results of research undertaken at the International Monetary Fund (IMF), showing that inequality is not conducive to good economic performance in practice. More egalitarian nations tend to do better than the more unequal ones. That this research finding comes from a generally conservative institution like the IMF is significant.

How Can Inequality be Reduced?

The inference is that reduction of inequality, both within nations and worldwide, is necessary. Poverty cannot be eliminated without simultaneously addressing the structures and processes that facilitate extreme concentration of wealth.

Waiting for the wealth to “trickle down” is a discredited strategy, little more than an ideological excuse for policy inaction. Piecemeal redistribution from rich to poor is not adequate either. The challenge is to develop institutional arrangements that make more equitable outcomes a normal feature of the political-economic system.

There are plenty of policies suitable for this purpose, given the political will to use them. Minimum wages can be raised. Taxes can be made more progressive and more focussed on accumulated wealth. These tax revenues could finance guaranteed basic income for all households, thereby setting a floor to distributional inequality. Or they could fund improvements in public infrastructure and services.

The willingness of governments to embrace redistributive policies varies considerably, of course. Among the more economically developed nations, there are two broad clusters. One, headed by the United States, has high inequality of income, wealth and power and current political leaders committed to their perpetuation. The trickle-down myth lives on, despite all empirical evidence to the contrary. In the other cluster, including the European nations and the Nordic states especially, there is more emphasis on the role of progressive taxation and welfare state expenditures as a means of countering the tendencies towards greater inequality.

Among the poorer nations, there is also a great diversity of experience. China and India, the world’s two most populous nations, have had outstanding macroeconomic performance over the last three decades, but internal economic inequalities have risen sharply.

Elsewhere, especially in many of the countries of sub-Saharan Africa, the problems of poverty have become yet more intense and widespread.

Oxfam is to be applauded for drawing attention to these inequalities and the resulting problems. But parading the latest data on growing economic inequalities and showing the adverse social consequences is evidently not enough. Indeed, the numbers alone may tend to engender more fatigue than outrage, especially in the light of the apparent incapacity or unwillingness of current international institutions to turn the situation around.

Recognizing this, the title of the latest Oxfam report – “Public Good or Private Wealth?” – seems to signal a fundamental re-think. Its dominant message is the need for a social provision of public goods. This links the rich-poor inequality to the inequality between public and private wealth.

Indeed, societies with more wealth in public rather than private hands are better able to provide social services – public housing, public education, public health, public transport, and public childcare, for example – and to do so freely or at low prices that poor people may afford. Public provision of this sort can ensure that all people have the basics for a decent existence even if their money incomes are meager. Thus, social provision, funded by taxing wealth, can create fairer societies.

The poorer nations would only be able to undertake the social provision of this sort if international development aid were to be markedly increased. The affluent nations currently have a formal commitment to allocating 0.7 percent of their GDP for this purpose, but only five currently hit this target. The U.S. and Australia give only about a quarter of their due share. Meeting the international aid commitment, and targeting its allocation to the social provision of public goods, is crucial if the global situation is to improve.

It is ultimately in the interests of all of us all – rich and poor, within and across nations – to pursue social justice, economic security, ecological sustainability, and peace. Equity is integral to all these goals. Are the world’s leaders listening?

Disclaimer: The views and opinions expressed here are those of the author and do not necessarily reflect the editorial position of The Globe Post.
Share13Tweet

Why Some Inflated Prices Won’t Come Down: Ramen and Eggs Tell the Tale

by Matt Helder and José A. Cabrera

Today We Celebrate This Win, but Tomorrow We Get Back to Work

Pandemic Could Push 45 Million in Latin America Into Poverty: UN

Philippines to Charge Time 'Person of the Year' Winning Journalist