by Jawad Kadir
in Opinion

Suicide bombings, air strikes, and pilots being held captive are events that would, in any other circumstance, pre-empt a war on the horizon, but Pakistan and India’s complex relationship is unlikely to trigger such an event. Why? The two need each other alive.

Last month’s suicide bombing in Indian-administered Kashmir that killed over 40 Indian soldiers was the deadliest militant attack on Indian forces since the insurgency against Indian rule in the region began three decades ago. A Pakistan-based terrorist organization claimed responsibility, which has once again escalated tension between the nuclear-armed rivals.

The incident in Kashmir was followed by an Indian air strike on Pakistani territory claiming to kill over 300 terrorists. Pakistan denied this claim and said the attack only destroyed a few trees near the border. The very next day, Pakistani air force gunned down two Indian jets and captured one of the pilots. 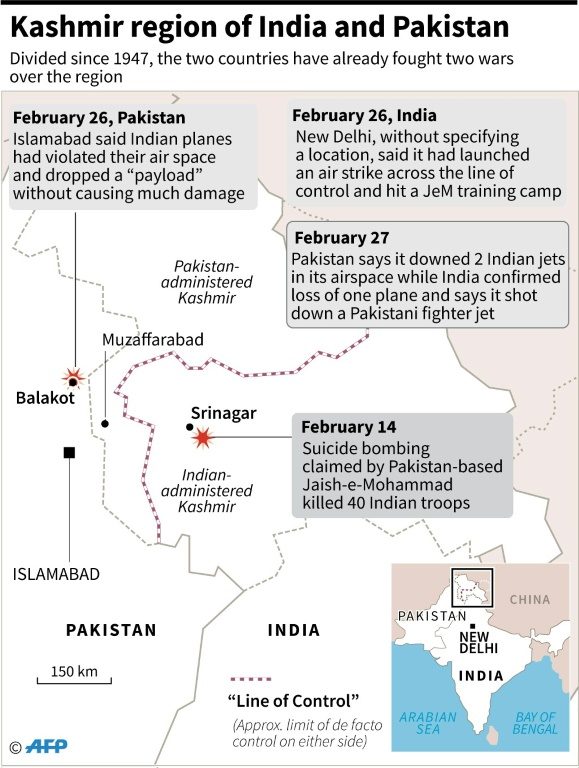 To defuse the situation, Pakistan Prime Minister Imran Khan warned his Indian counterpart of the potentially catastrophic consequences and appealed for dialogue.

These developments have the international community worried about the possibility of an all-out conflict, which would seriously challenge security in the Asian subcontinent. However, there also prevails a popular narrative that the elites in both countries use the flare-ups to serve their political agenda.

A recent book, written by the former intelligence chiefs of India and Pakistan, goes further and claims that the governments sometimes accommodate each other. At times Pakistan has even allowed India to drop a couple of bombs at harmless places in Pakistan, just to satisfy the Indian public’s opinion.

Since the violent 1947 partition of British India in India and Pakistan, both countries have pursued policies that diametrically oppose each other. Pakistan’s military even owes its powerful role in politics to the popular “desire” for competing/defeating India at any cost. The majority of Pakistanis see the military as the only powerful institution that can compete with India.

To secure the popular votes, all the political parties in Pakistan currently seem to be on the same anti-Indian page. The scenario is not much different in India, where Prime Minister Narendra Modi is said to have ignited anti-Pakistani sentiments in light of the upcoming elections.

In India and Pakistan, it is the popular sentiment to undermine the other that determines policies. After the recent incident in Kashmir, one can easily notice an ongoing prestige competition on social media, engaging people in all classes from both countries.

Even during times of peace, the nations are electronically belittling each other; be it during a sports event or because of a victory in the technological field. A recent visit of the Saudi Crown prince to both countries started a debate about which of the states was more respected by the visitor.

This prestige factor has always been present in India-Pakistan relations. After India conducted five nuclear tests in 1998, Pakistan responded with six tests to satisfy the nation psychologically and to prove to the world that “we are no less than India.”

This act was in line with the local idiom “Pagg Uchi ho jaye” (the turban must stay high) and implies that Pakistan’s policies revolve around acquiring prestige, with India as a reference point.

It is also worthy to mention that it is humiliation and not elimination that matters in India-Pakistan relations.

The two each need their counterpart alive, just to let the other down again and again, and to prove their superiority to the international community. For this reason, the obvious numerical and military might of India is persistently challenged by Pakistan in spite of having lesser capabilities, which always hurts India’s prestigious stance.

India suffers from an “I am not respected” syndrome, while Pakistan feels it is not given a proper status. Naturally, when both countries feel they have proven their prestige, tension starts to de-escalate. This appears to be the current stage the states are at after Pakistan returned the Indian pilot the country captured.

This is why clashes never lead to the point of no return, despite having had three major wars and several armed conflicts. Even during the Indo-Pakistani War of 1971, India captured over 93,000 Pakistani prisoners of war only to return them safely after India’s prestige had been satisfied.

Both nations will continue to compete with the purpose of maximizing their prestige against each other, but it is not likely they will eliminate each other. India and Pakistan need each other as a part of their psychological integrity. Because an all-out conflict would endanger the other’s existence, this is a questionable scenario.

Disclaimer: The views and opinions expressed here are those of the author and do not necessarily reflect the editorial position of The Globe Post.
Share143Tweet

Trump Lashes Out at 'Crazy' Opponents as Pressure Mounts