Hate Crimes, the Fraying of America, and the Prospect of Racial Armageddon

by George Michael
in Opinion

There has been an uptick in hate crimes in the United States over the past few years. Photo: Spencer Platt, AFP

Over the past few years, a wave of hate crimes has punctuated news headlines in the United States. Blacks, Latinos, Jews, Muslims, and people from the LGBT community have all reported victimizations.

Data collected over recent years confirm that there has indeed been an uptick. And this February, the Southern Poverty Law Center – a watchdog group that monitors extremism – reported a record high number of hate groups operating in America.

These trends could portend an ominous future for the nation.

The upsurge has often been attributed to the rise of Donald J. Trump. His campaign rallies were lighting rods for protests and repeatedly marked by violence. Indeed, a spike in hate crimes was recorded in the last quarter of 2016, suggesting that there was a so-called “Trump effect.”

A study conducted by the University of Pennsylvania found that cities that hosted a Trump rally experienced an average of 2.3 more assaults reported on the day of the event than on a typical day.

Before the launch of the Trump campaign in June 2015, the level of hate crimes had actually been dropping, dipping to the lowest figure in 2014 since reporting began in 1992. But according to the FBI’s statistics, hate crimes increased the day after the 2016 election, with a 92 percent increase in average daily hate crimes in the two weeks following the vote compared to the daily average at the start of the year.

It is only fair to note that Trump supporters have been victimized as well. Scores of assaults against people wearing Make America Great Again hats have been recorded throughout the country.

Just last month in New Jersey, an 81-year-old man wearing such a hat was assaulted by a teen after an argument broke out between the two. These kinds of attacks might explain why hate crimes against white Americans was the fastest growing category in 2016, according to FBI statistics.

What is the best approach to deal with the rising tide of hate crimes? The main innovation of hate crime legislation is the notion of sentence enhancement. This measure redefines conduct that is already criminal as an aggravated form of an existing crime by increasing the punishment if there is a biased motive.

The rationale for this approach is that the whole group to which the victim belongs suffers insofar as the hate crime is intended to provoke fear and intimidation in that specific community. 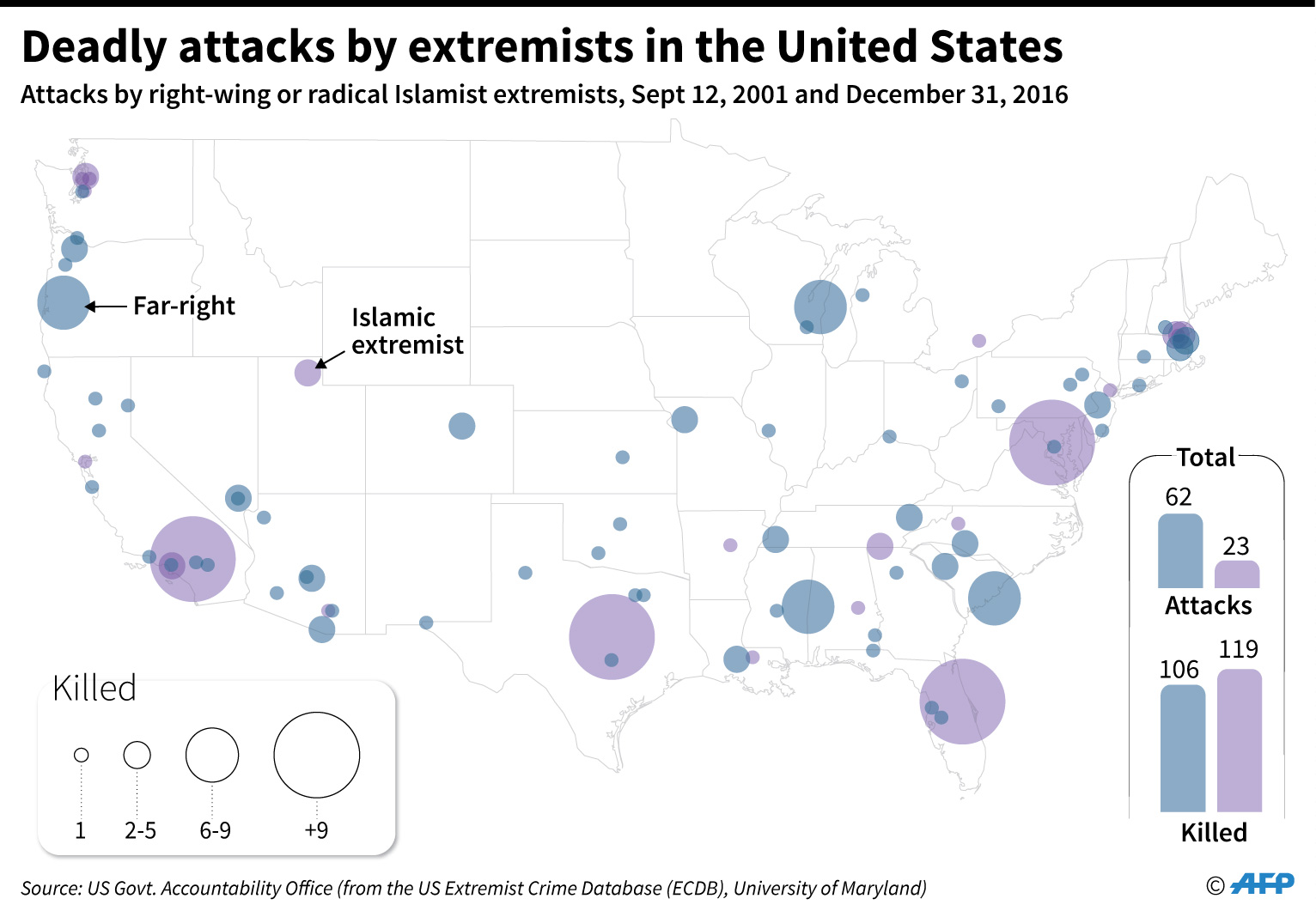 Finally, there is a symbolic component. Hate crime legislation sends a strong signal that the community condemns bigotry and welcomes all people.

But how effective has hate crime legislation been? Enhanced penalties may send a symbolic message against hate, but offer little utilitarian value as a deterrent. As the National Institute of Justice concluded in 2016, research indicates that the likelihood of getting caught is a vastly more effective deterrent than draconian punishment.

Furthermore, research suggests that the prison experience can exacerbate instead of reducing recidivism. One of the most horrific hate crimes ever recorded – the 1998 dragging death of James Byrd Jr. – was carried out by three white men in Texas. One of them was believed to have been sexually assaulted in prison. Not long after he entered one of the toughest prisons in Texas for a burglary conviction, he was gang-raped by black prisoners. Enraged by this humiliating assault, he joined a white power gang for protection.

What is more, there is little evidence that hate crime legislation has the intended effect of promoting inter-group harmony. In fact, just the opposite could be true, as hate crime laws encourage people to view crimes through the perspective of group identities.

Such legislation, far from fostering improving inter-group relations, often encourages the opposite effect by emphasizing group differences and grievances. By redefining such crimes as an aspect of inter-group conflict, hate crime laws encourage groups to identify themselves as victimized and besieged. Conceivably, this can lead to a status competition between victim groups and in doing so increase each group’s sense of resentment.

As Jussie Smollett case illustrates, the media often find it irresistible to sensationalize cases that follow a particular narrative. In this case, a gay black television actor assaulted by two white Trump supporters in Chicago was certain to make headlines.

In retrospect, the details seem outlandish: two racist, Make America Great Again hat-wearing men in Chicago (a city that went 83 percent for Hillary Clinton) attacking a black gay actor around whose neck they place a noose and on whom they pour bleach at 2 am in sub-zero temperatures. And to top it all off, according to Smollett, they referred to him as that “that Empire n—-r” and yelled, “this is MAGA country!”

The fact that two racist white men would recognize Smollett as an actor who plays a character on the TV series Empire, which dramatizes a hip-hop company, made his account all the less plausible.

.@JussieSmollett – what about MAGA and the tens of millions of people you insulted with your racist and dangerous comments!? #MAGA

To be sure, hate crimes do occur in America. With a diverse population of over 326 million people, bias crimes are bound to occur occasionally. But as some researchers have concluded, a great many of hate crime stories turn out to be hoaxes.

As Wilfred Reilly, the author of the upcoming book Hate Crime Hoax pointed out, motivations for fabricating such crimes can vary. Smollett, for example, allegedly hoped that the racial attack would make him a sympathetic figure, and in doing so, boost his salary. In a notorious 2004 racial hoax, Susan Smith concocted a story that an armed black man had hijacked her car in an attempt to cover up the drowning murder of her two sons.

Thankfully, the Smollett episode appears not to have occasioned any retaliatory violence or much division in the country.

On the political left, the initial moral grandstanding was followed by admonitions that the incident should not detract from the seriousness of authentic hate crimes. On the political right, initial skepticism gave way to Schadenfreude. But perhaps because of the outlandishness surrounding the details of the story, most people were inclined to set back and wait for more information to come forth before reaching conclusions.

In our polarized contemporary political culture, a single highly-charged incident can have a ripple effect throughout society. For example, back in 2012, the Washington Post reported a number of attacks that were inflicted on whites by blacks in retaliation for shooting death of Trayvon Martin.

Opining on the Jussie Smollett fiasco, Najee Ali, a black civil rights activist and director of Project Islamic HOPE, warned that the incident could have unintentionally started a race war.

Although it might seem overwrought and premature to warn of a Sarajevo effect from a particularly divisive incident, it goes without saying that hate crimes certainly undercut the social capital that is so vital in maintaining a civil society that we too often take for granted.

The understandable anger and moral outrage surrounding hate crimes often have the effect of causing great damage to race relations. Amidst the polarization of our nation, it behooves all of us to refrain from the emotive rhetoric that frequently follows highly-charged hate crimes.

Hate crimes should certainly be condemned and taken seriously. But perhaps it is best to treat hate crimes with the standard tools of law enforcement using traditional criminal statutes. Much divisiveness and cynicism could be avoided.

Disclaimer: The views and opinions expressed here are those of the author and do not necessarily reflect the editorial position of The Globe Post.
Share21Tweet

Professor of Criminal Justice at Westfield State University in Massachusetts