Scotland and the Battle of the Unions: Independence over Kingdom?

by Michael Keating
in Opinion

The central claim of the campaign to take the United Kingdom out of the European Union was to “take back control.” In more formal terms, this meant restoring power to the sovereign and unitary parliament of the nation-state consisting of England, Northern Ireland, Scotland, and Wales. In the aftermath of the Brexit referendum, this was changed to the sovereignty of the people, whose will was to be obeyed.

In fact, the idea of the U.K. being a unitary, sovereign state is a peculiarly English conception. In Scotland, the U.K. is seen rather as a complex, plurinational union, without a single demos or people. Sovereignty is dispersed, and the union is a pact that can regularly be renegotiated. The latest renegotiation was the devolution settlement of 1998 that re-established a Scottish Parliament and Government, which have steadily accrued powers since then.

From this perspective, the U.K. constitution and the European Union, far from being incompatible, have a lot in common. Scots have lived in a union for over 300 years, and are used to negotiating their way through a complex world. Indeed, the settlement itself relied heavily on the broader European framework.

Within the E.U., ideas of divided and shared sovereignty are commonplace and this has helped to defuse the argument about where sovereignty lies within the United Kingdom. The Westminster Parliament claims that it is ultimately sovereign, many Scots disagree, but in the end, it hardly matters since the whole system is embedded in a wider framework in which power is dispersed.

E.U. membership has meant that the devolution settlement could be more extensive than would otherwise be possible, as large areas of policy are controlled at the European level. There are no U.K.-wide laws on education, the environment, criminal justice, agriculture, and regional development although the devolved governments work within European frameworks. Human rights are guaranteed not by any British instrument but by the European Convention on Human Rights (under the Council of Europe) and by the E.U.’s own charter of rights.

Support for Europe was one thing shared by both sides on Scotland’s 2014 independence referendum although they used it in different ways. The independence side promised that E.U. membership would provide a support system and guarantee Scotland’s continued access to U.K. markets. The No side warned that independence could mean Scotland being excluded from the E.U., at least for some time.

In 2014, Scots voted to remain within the United Kingdom by 55 percent. In 2016, they voted by 62 percent to stay in the European Union. With the rest of the U.K. voting by 52 percent to leave, Scots now discovered that they could not, as they wished, remain in both unions.

What is more, the U.K. Government insisted that, in the absence of E.U. frameworks in fields like agriculture and the environment, U.K.-wide frameworks would be required, which involved taking back devolved powers to the center. This sparked a series of fierce debates about Scotland’s place in the Brexit process. Although the U.K. Government later backed down on the more drastic proposals to regain powers, it did for the first time since the 1998 devolution settlement use its power to over-rule the Scottish Parliament on matters falling within devolved competence.

The initial response of the Scottish Government, led by the Scottish National Party (SNP), was to suggest another independence referendum. This faced three problems.

First, if Scotland were to remain as an independent state in the E.U. while the rest of the U.K. left, there would be a hard economic border between the two – this parallels the argument about the Irish border. 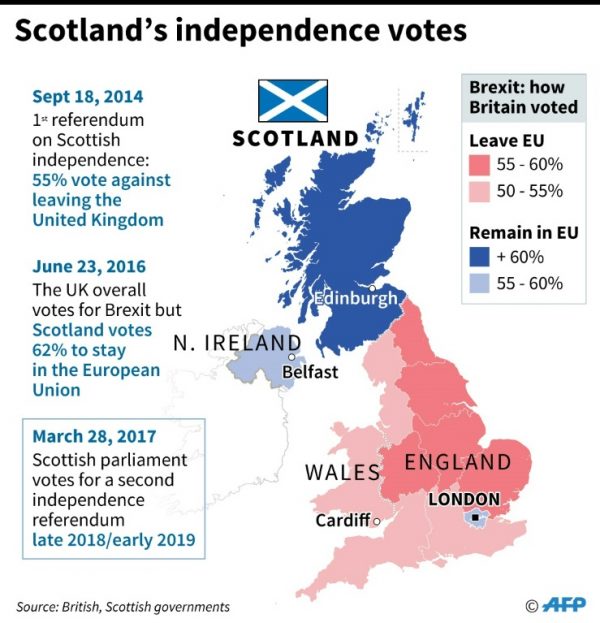 Second, there was no “Brexit bounce” in support of independence. Although the SNP has long linked independence with being in Europe, the public has never made the connection, and almost a third of independence supporters actually voted leave. Support for independence has remained remarkably steady since 2014 at around 45 percent.

Third, an independence referendum requires the authority of Westminster, as in 2014 and the Scottish Government has never denied it. The SNP’s difficulties were exposed at the snap general election of 2017 when the Scottish Conservative Party used the issue of a second independence referendum and the SNP’s pro-European stance to make something of a comeback. Although the SNP remains the largest party, its contingent at Westminster fell from 56 out of 59 Scottish seats to 35.

Independence was not the only strategy pursued by the SNP. At one stage, the party proposed that Scotland should remain within the European Single Market after the U.K. had left. This was rejected without discussion. The SNP has also suggested aligning with European regulations unilaterally and is taking powers to do so.

After hesitating for a long time, the SNP has sided with the Liberal Democrats, the Greens, the new party Change UK, and some Labour MPs to demand a second Brexit referendum. It gained the support of Labour and the Liberal Democrats as well as the pro-independence Greens in its objection to taking powers back to Westminster. It has made common cause with the Welsh Government in seeking a stronger role for the devolved administrations in the Brexit negotiations.

Although support for independence has remained constant at 45 percent, there have been signs of a shift in recent months. Large swathes of SNP Leave voters abandoned the party in 2017, which left SNP as a more homogeneously pro-European party, gaining some Remain and pro-independence voters from Conservatives and Labour.

Although there is a small pro-Leave sector within the party, it is pro-Remain to an extent matched only by the Liberal Democrats and Greens. After months of pressure, First Minister Nicola Sturgeon has now put the referendum back on the agenda but in a cautious way. There will be a referendum bill, but it will not be activated without Westminster consent. The other parties will be invited to contribute to a national debate and a Citizens’ Assembly will be convened.

All this is clearly in preparation for the elections of 2021 when the SNP and the Greens hope for a pro-independence majority, a mandate from the electorate, and that the fall-out from the Brexit chaos of Westminster will have swung Scottish voters further to independence in Europe.

The UK’s Woeful Response to the Coronavirus

Spain's Elections: the More Things Change, the More They Stay the Same?

With Surge in Right-Wing Violence, US Muslims Prepare for the Worst Ahead of Ramadan