by Thomas Harrington
in Opinion

In Spain’s elections of last week, Pedro Sanchez’s Socialist Party (PSOE) considerably expanded its presence in the country’s Parliament, while the Popular Party (PP), which for more than two decades has quite purposefully and successfully driven the country’s arena of “thinkable thought” toward the hard right, had its poorest electoral showing in years.

The other big news was that the Catalan independence party ERC won the largest number of seats in that Autonomous Region’s delegation to the parliament and that the neo-Fascist Vox party had a weaker showing than many had foreseen. 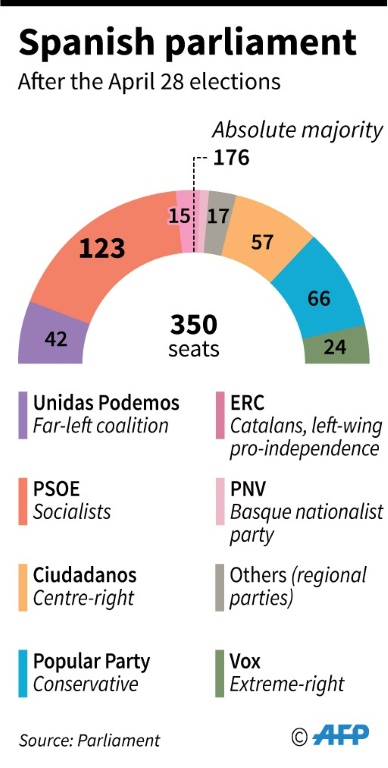 The common understanding of these events – as processed by the Madrid-based “liberal” press led by daily El País and its powerful, if albeit somewhat more nuanced, echo chambers in Barcelona (La Vanguardia and El Periódico) – was one of clear but cautious optimism. This conclusion rooted in the idea that Spaniards had, in effect, voted for moderate center-left change, and perhaps even a return to the practice of respectful dialogue between opposing parties.

In fact, the general sense of hope transcended the usual precincts of the centralist establishment to include certain elements of the independence-oriented Catalan left.

For example, in the wake of Sunday’s polls, Gabriel Rufian, the rhetorical firebrand of ERC, raised the possibility that Prime Minister Sanchez might be forced to talk about an independence referendum, as well as the possibility of halting the ongoing prosecutions of the members of the Catalan government who backed the 2017 independence referendum.

One of the most endearing elements of self-identified progressive parties, and the media outlets that like to give them visibility, is their great belief in the possibility of resolving conflicts within the confines of the existing social and political system.

It is also their greatest weakness, for it frequently leads them to impute goodwill to establishment leaders and political configurations that are manifestly lacking in this all-important quality, and whose only real goal is to enervate the “progressives” and their movement to the point where they can be harmlessly coopted into the existing political order.

Though it is not the only reason for the abrupt shifts we are now seeing in the Spanish political system, the issue of Catalan independence clearly towers above all other factors.

The independence movement’s sustained grassroots campaigning for greater democracy is most responsible for ripping off the mask of Spain’s supposedly “peaceful” and “successful” transition to democracy (1975-82).

These same Catalan citizens ignored an intense central government campaign of propaganda and intimidation and pressed ahead with a vote on their future. This forced many in the rest of Spain and around the world to acknowledge the existence of a Spanish Deep State that often works hand-in-glove with a profoundly corrupt judiciary to cancel out the exercise of many basic democratic rights.

And finally, the quiet insistence of the Catalan in seeking a more democratic life outside the confines of that supposedly sainted but in fact deeply flawed constitutional order has catalyzed the rise of the authoritarian right.

To say this is not, as some cynics like Catalan socialist (PSC) leader Miquel Iceta have done, to “blame” Catalan nationalism for the rise of the neo-fascists.

Rather, it is to simply point out that the decision of the more established conservative parties (PP and Citizens) to use the peaceful and democratic Catalan movement as their full-time rhetorical punching bag, and to engage in a near-daily competition regarding who would more swiftly and harshly suspend autonomous rule, has paved the way for the rise of Vox. After all, why vote for thinly disguised fascism when you can have the real thing?

So, where does the newly empowered “progressive” Pedro Sanchez come down on this absolutely central issue of Spanish political life?

Despite what you might have read, or want to believe, he lines up squarely on the side of the right-wing parties he just defeated.

While he and his government spokesmen generally avoid the grossly incendiary and punitive rhetoric of the nominal right, and carefully spice their public interventions with statements about the need for dialogue, their actual proposals on the Catalan issue are largely indistinguishable from those of their conservative rivals.

Sanchez, like them, has repeatedly said that he will never consent to the staging of a Scottish-style independence referendum. And like his rivals, he has repeatedly said that there is no solution to the Catalan problem outside the existing constitutional order which, of course, was bequeathed by the corrupt Francoist establishment in the late 1970s, and that quite purposely made the indivisibility of the state the country’s paramount legal and political value.

And like his more leather-lunged colleagues on the right, Sanchez has repeatedly portrayed Catalan independentists as a disruptive minority that seeks to impose its will on the majority of Catalans. This, despite the fact that the independence bloc has emerged victorious in the three consecutive Catalan Parliamentary elections, was conducted under a de facto occupation of Catalan institutions by the Spanish central government.

Indeed, it should also be remembered that Sanchez’s Socialist Party did not hesitate for a second when the then ruling PP called on them to vote in favor of the legally questionable suspension and occupation of Catalan autonomous institutions in October 2017 in response to the Catalan parliament’s democratic decision, taken mere hours before, to declare independence from Spain.

So, if the headlines you read about Socialist gains and PP setbacks conjured up hopes of a resolution to Spain’s long-festering problems, my advice would be simple and straightforward: curb your enthusiasm.

Pedro Sanchez may not be as grossly offensive as his fire-breathing counterparts on the right, but when it comes to safeguarding the decadent social and political order they venerate and have thrived within, he is their loyal servant.

And this being so, one can only wonder why the Catalan independence party ERC or the so-called quality press can think Sanchez’ recent victory might herald the tiniest possibility of real change in Spain.

Professor of Hispanic Studies at Trinity College in Hartford (US) where he offers classes on contemporary Iberian literature, cinema, and cultural history. His main lines of research are recent Peninsular movements of national identity, Iberianism, Contemporary Catalan culture, cultural theory, and the migrations between the so-called peripheral cultures of the Peninsula and the societies of the Caribbean and the Southern Cone