by Myriam Renaud
in Opinion

Pakistani students of a madrasa or Islamic school recite the Quran at a seminary in Islamabad, Pakistan in 2015. Photo: Aamir Qureshi, AFP

Pakistan’s latest drive to reform its Islamic schools, called madrasas, is unlikely to check the radicalization and violent extremism that some of them promote. The government is under pressure from the international community after terrorists from several extremist organizations, including madrasas, attacked and killed at least 40 paramilitary police in India in February. Many madrasas embrace a hardline (Deobandi or Salafist) interpretation of Islam and a certain number have ties to Afghanistan’s Taliban and Pakistani militant groups, including those responsible for the deadly attack.

To reform the madrasas, the government plans to bring them under control of the education ministry and compel them to add subjects like science to curricula that focus on Islamic theology and Arabic language. An approach more likely to be effective would be to entice students to attend non-religious schools. This would stop or reverse the growth of Islamic schools and reduce their ability to radicalize young people. But to achieve this, Pakistan will have to address at least two of the root causes that drive parents to choose Islamic schools for their children.

One challenge is the number of madrasas. Estimates vary but a 2015 report by HIVE, a Pakistan-based research center dedicated to countering extremism, set that number at 35,000. In 1947, when Pakistan was created as a homeland for British India’s Muslims, there were fewer than 300. According to Pakistan’s Board of Madrasas, only 10 percent are registered. How the ministry of education plans to bring the other 90 percent under its authority is unclear.

Another challenge is that many of the teachers and clerical authorities who are running madrasas resist adding modern subjects like science. So far, their resistance has the support of hardline religious political parties that succeeded in derailing past attempts at reform. These parties have such “street power” and “fear factor,” said Moeed Yusuf, the South Asia adviser at the DC-based United States Institute of Peace, that when the state is faced with their demands, it relents.

Is the state already showing signs of stepping back? Though the Federal Minister for Religious Affairs, Sardar Mohammad Yousuf, promised that the government “will ensure that no one is allowed to promote extremist ideologies, terrorism, hatred, or sectarianism,” he also told the Voice of America in early 2019 that provincial governments are being allowed to develop plans to reach these goals “at their own pace.” Hence, no deadlines have been set for the promised reforms, calling into question the government’s seriousness.

In the meantime, several non-religious reasons motivate families to send their children to madrasas. One reason is that, since the Qur’an is written in Arabic, madrasas teach this language. Though Pakistan is home to over 70 languages, few Pakistanis speak Arabic. Extreme poverty drives many young Pakistanis abroad to find work – most often in neighboring, oil-rich Arabic-speaking countries.

More than seven million Pakistanis left between 1971 and 2013 “for the purpose of finding a job,” according to Pakistan’s Bureau of Emigration. Of these migrant workers, fully 96 percent headed to Saudi Arabia, the United Arab Emirates, Oman, Bahrain, Qatar, and Kuwait. Moreover, the rate of outflow continues to increase. The International Labor Organization reported that in 2008, 419,842 Pakistanis traveled to these six countries combined, while in 2013, this number rose to 609,478, an increase of over 45 percent. Pakistan ranks second among South Asian nations as a source of foreign workers. 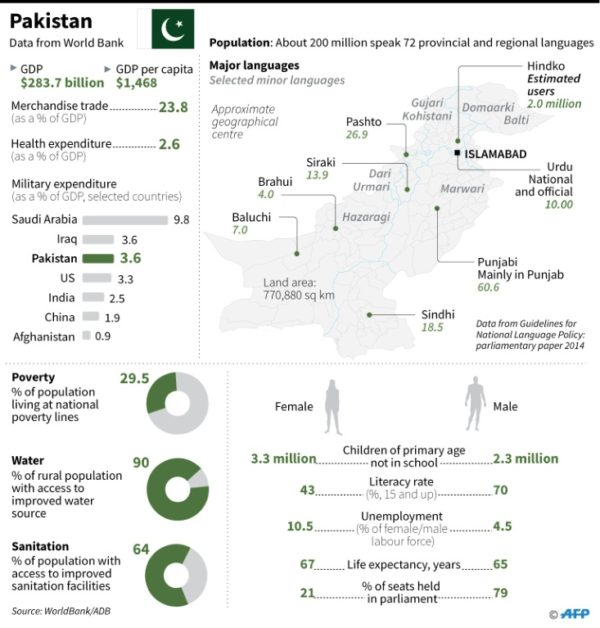 Because Pakistan considers itself a pro-emigration country and because of the economic realities that drive citizens to seek employment outside the country, the International Labor Organization argues that “it is very important for Pakistan to have a solid and clear policy to support overseas employment for Pakistani youth.”

Such a policy would include offering Arabic-language instruction in non-religious schools to prepare them for future work in the Gulf region. The Federal Minister for Religious Affairs announced in 2014 that “the groundwork to introduce Arabic into the curriculum” in public schools was complete, but there is little evidence to suggest progress beyond “the groundwork to introduce.” Also, as reported in Pakistan’s respected English-language news source Dawn, this project is not linked to emigration support, but to “Arabicizing Pakistan” to make it “more ‘authentically religious’.”

Yet another non-religious reason that pushes families to send their children to madrasas is that Pakistan’s public schools often fail to teach basic reading and arithmetic skills. In 2018, the Economist flatly stated that “Pakistani education has long been atrocious.”

As an illustration, 87 percent of the education budget for Pakistan’s provinces are allocated for teachers’ salaries but many teaching positions are patronage jobs handed out by political parties to reward allies. One result has been teacher absenteeism, or “ghost” teachers. At the peak of the problem, rates reached 40 percent in the second-most populated Sindh province.

According to UNESCO, besides “ghost” teachers, Pakistan’s public schools lack adequate infrastructure and teaching materials. The Economist found that of the children who complete five years of primary school only half are literate. In the rural areas, where 63 percent of Pakistan’s population lives, only two-fifths of 8- and 9-year-olds understand arithmetic well enough to subtract 25 from 54.

Upper-middle and upper-class parents in affluent urban areas have the option to send their children to expensive private schools with trained and dedicated teachers, well-appointed classrooms, and good quality, often imported, teaching and learning materials. One-third of all non-religious schools are private; the money families pour into them amounts to more than the government invests in the other two-thirds. Poor families who can’t afford private non-religious schools face the choice of sending their children to free government schools where they learn little, or to free madrasas where they will learn basic reading and arithmetic.

Not only will improving the government-sponsored education system offer a viable non-devotional alternative to madrasas, but it will improve Pakistan’s economy so fewer of its young people need to emigrate to find work. Until then, adding the study of Arabic to public schools will help prepare them for what lies ahead.

So far, Pakistan’s government shows little appetite for seizing control of madrasas that radicalize their students and foster violent extremism. It undoubtedly fears running afoul of hardline political parties. The best way, then, to undermine the intolerance and religious exclusivism some madrasas teach would be to attract students to public schools by offering better alternatives.

Ph.D.: Principal Investigator and Program Director of the Global Ethic Project at the Chicago-based Parliament of the World’s Religions