by Nicholas Allen
in Opinion

Britain's Prime Minister Theresa May announced her resignation on May 24. Photo: AFP

Britain once had a reputation for being a stable, well-governed country. Its political system was admired, its leaders were respected, and its style of politics was something to be aspired to.

Britain today is not a stable, well-governed country. Its politics have become increasingly unstable ever since Britons voted to leave the European Union in June 2016, and it now gives the appearance of being virtually ungovernable. Brexit has made Britain the basket case of Europe. Neither the country’s political institutions nor its politicians seem up to the job.

The task of leading the country and delivering Brexit – or else resolving the matter in some other way – will soon fall to a new man or woman.

For just under three years, May struggled to deliver on the 2016 referendum result. On three occasions she asked MPs in the House of Commons to approve the withdrawal agreement negotiated between her government and the European Union. On three occasions a majority of MPs refused to do so. The final straw for many in her party came when May proposed asking MPs a fourth time. 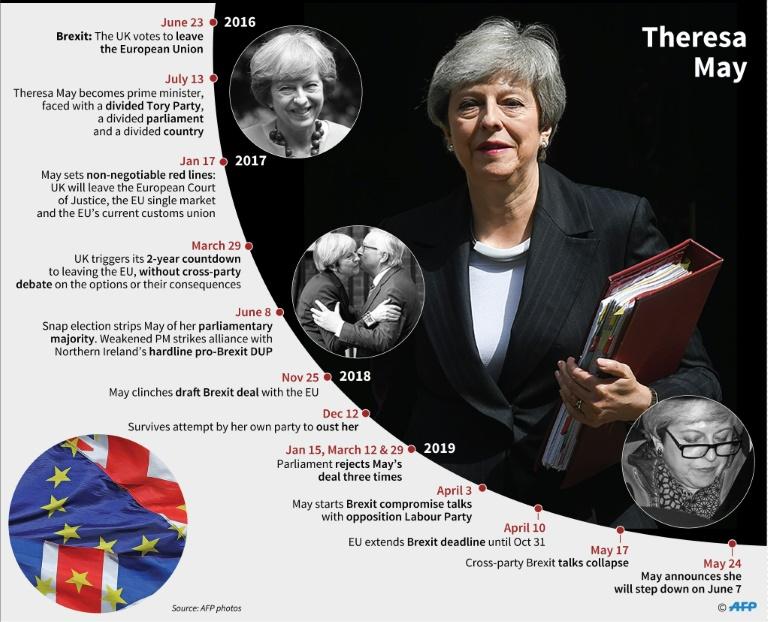 There is no doubt that Theresa May made mistakes as prime minister. She was not conciliatory to the 48 percent of Britons who voted to Remain in the E.U., she relied too much on trusted advisers, and she often chose her words poorly. Her suggestion that no deal would be better than a bad deal seemed absurd to all but the fundamentalist Brexiteers in her party.

Above all, May failed to persuade, or even try to persuade, both parliament and the country that some kind of compromise was necessary in the wake of the Brexit referendum. Her relatively hard-Brexit interpretation of the result – that the U.K. needed to reassert its sovereignty and leave the E.U.’s single market and customs union – was not unreasonable, but it was not matched by any attempt to teach former Remainers or those who wanted an even harder Brexit that neither side could get exactly what they wanted.

Whether or not a more skillful prime minister could have done any better is another matter. For a start, the governing Conservatives were hopelessly divided over Brexit. Some Tories wanted a soft Brexit and to remain closely aligned with the European Union. Others wanted a hard Brexit and to cut loose from E.U. rules as much as possible. Any kind of proposed future relationship with the E.U. was likely to cause trouble with one of the party’s wings.

Compounding these problems was the nature of the British political system. Governments are generally meant to govern, oppositions are meant to oppose. Adversarialism is institutionalized at Westminster in the layout of the House of Commons, and tribalism runs deep in political parties. Cooperation and consensus do not come easy.

If anything, the situation that May initially encountered has only got worse. The Conservatives are even more divided, especially in the wake of the disastrous European Parliament elections and the strong showing of Nigel Farage’s Brexit Party. The Labour opposition is also divided and equally perplexed about what to do next.

Meanwhile, the country at large is becoming increasingly polarized over Brexit, and the established parties are struggling to respond. The old two-party system has never looked so vulnerable.

In the circumstances, it is hard to imagine why any sane person would want to replace May. Remarkably, however, there is no shortage of candidates to succeed her as Conservative party leader and Britain’s prime minister.

Any or none of these may win. The two-stage process is something of a lottery. Conservative MPs will first whittle down the field to just two candidates in successive rounds of voting. Rank-and-file Conservative members, of whom there are about 125,000, will then choose between them.

Johnson is an extremely divisive figure. He is seen as a dishonest, unreliable clown by many Tory MPs, but a charismatic and gifted leader by his followers (primarily Brexiteers). Yet, he seems to be the favorite among Tory members and is in with a strong chance of winning unless his opponents in the Commons can prevent him from reaching the last two.

The fact of the matter, however, is that whoever wins the leadership contest will struggle to do much better than Theresa May. The Conservatives are still divided, the country is still divided, and there is no clear majority in the House of Commons for any solution to the Brexit impasse. The basic arithmetic that confounded May could well confound her successor.

It is anyone’s guess as to what will happen with Brexit. What is certain is that Britain does not look like becoming a stable and governable country any time soon.