Abortion Bans Across US More About Politics Than Anything Else

by Melissa Haussman
in Opinion

While eight U.S. state legislatures have passed restrictive laws to undercut or entirely remove abortion access during 2019, none of the bans is currently in effect.

The Kentucky ban, starting at six weeks in the pregnancy, has been blocked by a judge while the Mississippi ban, also starting at six weeks, was heard in a court challenge on May 21.   Since federal Judge Carlton Reeves had already blocked a Mississippi law banning abortion at 15 weeks in 2018, it was not surprising when he did the same to the six-week ban on May 24, stating that “by banning abortions after the detection of a fetal heartbeat, the law prevents a woman’s free choice, which is central to personal dignity and autonomy.” 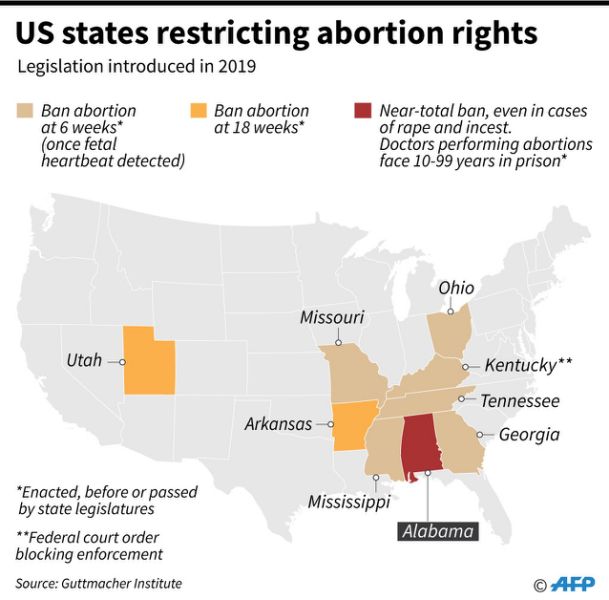 Notably, Kentucky, Mississippi, and Missouri each only have one abortion clinic, reflecting years of opposition activism.

The new regulations are the latest in long term attempts to make abortion more difficult. However, given previous federal and Supreme Court rulings conveying skepticism about “non-scientific” restrictions before viability (which does not occur until around 24 weeks) these bans are more about politics than anything else.

The 2019 state laws are more extreme examples of abortion opponents’ actions since the 1973 Supreme Court’s Roe v. Wade protected a woman’s right to privacy in consulting with her doctor in choosing pregnancy termination in the first trimester. Roe v. Wade also established that states could regulate the procedure concerning the mother’s health during the second trimester and fetal health in the final trimester.

Since 1973, over 90 percent of abortion procedures occur in the first trimester. The 50 states have passed nearly 1,100 anti-abortion laws since the Roe v. Wade decision, with almost 30 percent of them since 2010.

The most recent state actions illustrate the nexus of pro-choice and anti-abortion contestation in the U.S. federal system, where actions taken at the states will often percolate up to federal courts since they involve U.S. constitutional challenges.

For example, in 1992, the Supreme Court ruled in the case of Planned Parenthood v. Casey, in which the constitutionality of several Pennsylvania state laws regarding abortion was challenged.

The Supreme Court’s decision upheld some limits of the 1982 Pennsylvania Abortion Control Act, including parental notifications for minors (with a judicial bypass provision) and a 24-hour waiting period to provide “informed consent” by the woman seeking the termination. However, the decision overturned the state’s spousal notification requirement and declared the 1973 trimester framework “unworkable” while acknowledging that women still had the right to seek terminations before fetal viability outside the womb.

The new calculus was whether a state’s restriction posed an “undue burden” to the woman in accessing her constitutionally-protected right to privacy.

In the 2016 Supreme Court case of Whole Women’s Health v Hellerstedt, two aspects of Texas law were found to provide such an “undue burden:” those which required abortion clinic providers to have to admit privileges at nearby hospitals and required clinics to have the same facilities as ambulatory surgical centers.

This is a victory for women and families in Texas and across the country! #MyDecision pic.twitter.com/UoCSyzxHT3

Most importantly, the decision stated that “ that scientific evidence must be considered when evaluating the constitutionality of abortion restrictions.”

On the side of abortion opponents – represented most vocally by the Republican-affiliated Susan B. Anthony list which funds female Republican anti-abortion candidates and legislators and Concerned Women for America – the favored strategy of most of the 2019 laws has been to get abortion outlawed as soon as there is a purported “fetal heartbeat,” which some claim is at six weeks.

On the other hand, as pro-choice activists and certain judges have pointed out, a fetus is still largely non-viable outside the womb before 24 weeks (6 months).

Similarly, the fact that the majority of state legislatures has been under unified Republican control since 2012 has meant that Republican-affiliated anti-abortion groups have made great headway in passing legislation which will not pass the “scientific evidence” requirement when it reaches the Supreme Court.

While Justice of the Supreme Court Anthony Kennedy’s former clerk, Brett Kavanaugh, replaced him in 2018, it is highly unlikely that he can make a case for the constitutionality of “fetal heartbeat” bills.

On May 28, the Supreme Court turned down an appeal from the state of Indiana on a law previously signed by Governor (now Vice-President) Mike Pence, which outlawed the ability of women to seek abortion on fetal disability or fetal sex grounds. The Supreme Court said it was expressing no views on the constitutionality of bans based on women’s reasons for seeking abortion.

Professor of Political Science at Carleton University. She is the author, co-author or co-editor of six books on comparative politics and the comparative policies of women’s reproductive health as well as book chapters and journal articles in the same area