by Stuart Pimm
in Opinion

In early May, media outlets screamed another dire headline: “A million species at risk of extinction.” The news came from the press release of the U.N.-affiliated Intergovernmental Science-Policy Platform on Biodiversity and Ecosystem Services, a bureaucratic name long enough to require a deep breath before speaking it. Make that IPBES – “ip bess” for short. The work of more than a thousand scientists around the world, the complete report will surely weigh in at about a page each.

To be blunt, what does it say? Do we believe its conclusions? Why should we care? And what can we do about it?

Scientists struggle to explain their work to the media. I shudder when I hear claims of “the sixth mass extinction.” The previous one, number five, killed off the dinosaurs. It’s impossible to make sensible comparisons between now and 60 million years ago. I was relieved when IPBES didn’t use that expression. I was even happier when they didn’t talk about “global tipping points” beyond which human actions will lead to societal collapse. There’s no evidence for that; it is just more grandstanding to grab headlines.

So, what about a million species at risk? It’s neither right nor wrong. It grabs attention, but is hugely uncertain and misses a key point. The problem is that we don’t know how many species there are on land and in the oceans. IPBES picks one of the many estimates – that there is a total of eight million species – and then a much more confident, but conservative estimate of one in eight being at risk. 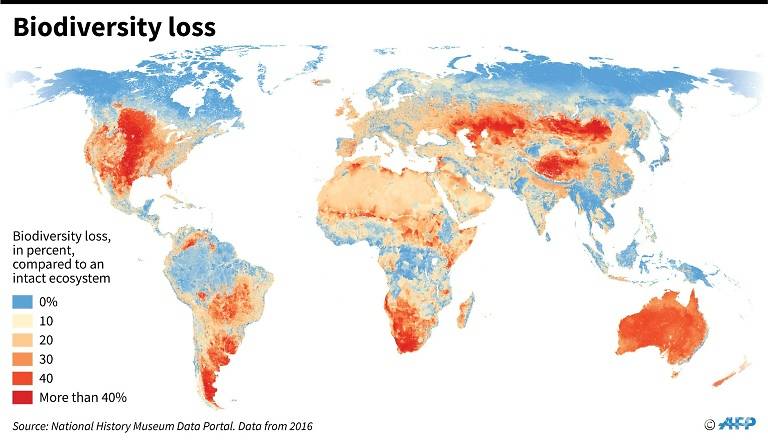 Simply, we don’t have scientific names for more than two million species. Many millions more are unknown. There are huge uncertainties in how many kinds of fungi there are, for example. Why does that matter? I imagine the first baker of bread complaining how it got mold in a few days and fervently wishing it would go away. We now have a name for it: Penicillium.

What we don’t know might help us, our health, and our crops – or harm them. Do we have a scientific name for the aphid that’s transmitting a viral disease and destroying a crop? Or one for the tiny parasitic wasp that might control the pest?

Not knowing how many species there are – particularly fungi and insects – is a scientific problem that we should admit. Ignorance is not bliss.

Nonetheless, we are certainly facing an extinction crisis. Delve into the report and it quickly embraces an insight my colleagues and I developed 25 years ago. Species are “born” through evolution and “die” via extinction. As with individual humans, it’s a matter of birth and death.

We know global birth and death rates for our species: about 18 births and 8 deaths per 1,000 individuals per year. (So our population is growing.) We can calculate comparable numbers for the life and death of species. By following the fate of species from when scientists first described them, we know that for the best-known species, the “death” rate is between 100 and 1,000 extinctions per one million species per year.

We know how quickly species are born from studying their DNA. Ancestors of humans and chimpanzees, for example, split four million years ago. These and many other studies show that yearly between 1 and 10 new species per ten million species appear.

The IPBES report is important in that it provides an international consensus on this global loss of species. The parallels to the more familiar international panel on climate change, the IPCC, are obvious. We agree on the problem regardless of how we pitch it to the media.

Where IPBES and IPCC diverge is why we care and what we can do about it. Climate solutions must be global, but for the loss of species, it’s more complicated.

Three major sources of the carbon dioxide that now reach alarming concentrations in the atmosphere are the vehicles and industry of North America, those of Europe, and the burning of tropical forests. The various climate disruptions these cause, such as increased temperatures, extreme weather events, and sea-level rise, mean that actions in the U.S., Europe, and the Amazon harm people (and species) worldwide.

International consequences require international solutions, of course. Tropical forests hold about two-thirds of all known species, and likely an even greater share of the as-yet-unknown ones. The loss of tropical habitats harms species directly and indirectly as the heating climate forces species worldwide to live at higher elevations or higher latitudes when they can. Slowing tropical deforestation is an international priority for biodiversity and for minimizing climate disruption.

In contrast, why should people outside Africa care if lions go extinct? I’ve spent nights in a tent with lions prowling outside. I’ve seen how they can devastate a family’s livelihood by breaking into protective bomas at night and kill livestock. One readily understands how poor families would want lions to go extinct, or tigers in India, or countless less charismatic or even unknown species, for example on a steep hillside in Colombia that a farmer wants to clear for subsistence crops.

Why Should We Care?

The IPBES report details many reasons why everyone should care and why what nature does for us is valuable. The report also argues that there are ethical issues: what kind of planet do we want to pass onto our children and countless generations to come?

The challenge is to ensure that the benefits species provide go to the people who decide their fate. Can we ensure that the boma owner benefits from the ecotourist a few miles away staying in a $1,000 a night luxury resort? Can we find livelihoods that offer alternatives to clearing tropical forests? Ecosystem services may be valuable, but who is paying for them and to whom?

Answering these questions requires ineluctably local solutions. It requires finding ways to minimize the conflict between people and dangerous species. It requires finding the critical places where species are at risk of extinction and restoring damaged landscapes, their species, and the services they provide. This should provide local employment.

The state of Earth and its biodiversity is not good, but its future is not hopeless.

Doris Duke Chair of Conservation Ecology at the Nicholas School of the Environment at Duke University. He is a world leader in the study of present-day extinctions and what we can do to prevent them