This Year Wasn’t Good for Journalists. Will 2019 Be Better?

by Sahar Khamis
in Opinion

A protester dressed as Saudi Crown Prince Mohammed bin Salman with blood on his hands demonstrates outside the Saudi embassy in Washington, 2019. Photo: AFP

As we are about to say goodbye to 2018, it is important to stress that, sadly enough, it wasn’t a good year for journalists.

The number of reporters killed and arrested was the highest in the last three years, and another equally scary phenomenon is on the rise: missing journalists. It is necessary to discuss these findings and their present and future contexts. A free press is crucial, as it contributes to democratic transitions. Journalists play the role of watchdog over ruling regimes, by exposing corruption and violations while they also help in building active civil societies.

Over 250 reporters were jailed for the third year. This suggests that the authoritarian approach in dealing with critical news coverage and oppositional media is far from a temporary spike or a fading phase. Rather, it is turning into an escalating, global trend, or what could be sadly described as “the new normal” for journalists.

The Committee to Protect Journalists’ 2018 census report accounted for a total of 60 missing journalists. The organization’s Middle East and North Africa Program Coordinator Sherif Mansour told me that this new trend poses a real threat and a serious challenge, not only to journalists worldwide but also to those who are trying to protect them because many governments refuse to take any responsibility for the disappearances or even acknowledge them. This complicates the work for international institutions and human rights agencies that try to intervene and to provide the needed help and support.

Some countries ranked the same as in previous years, such as Afghanistan, which remains the deadliest country for journalists, and Turkey, which continues to be the worst jailer of journalists. This last point is particularly ironic and paradoxical, taking into account that Turkey’s President Recep Erdogan is the most vocal and fiercely outspoken world leader against Saudi journalist Jamal Khashoggi’s horrific murder.

Other countries’ status changed for the better or the worse. On the one hand, some countries with a traditionally bad record for press freedom have improved. Ethiopia, which for years had the reputation of one of the world’s worst jailers of journalists, did not imprison any journalists in 2018. That was the first time in 14 years. 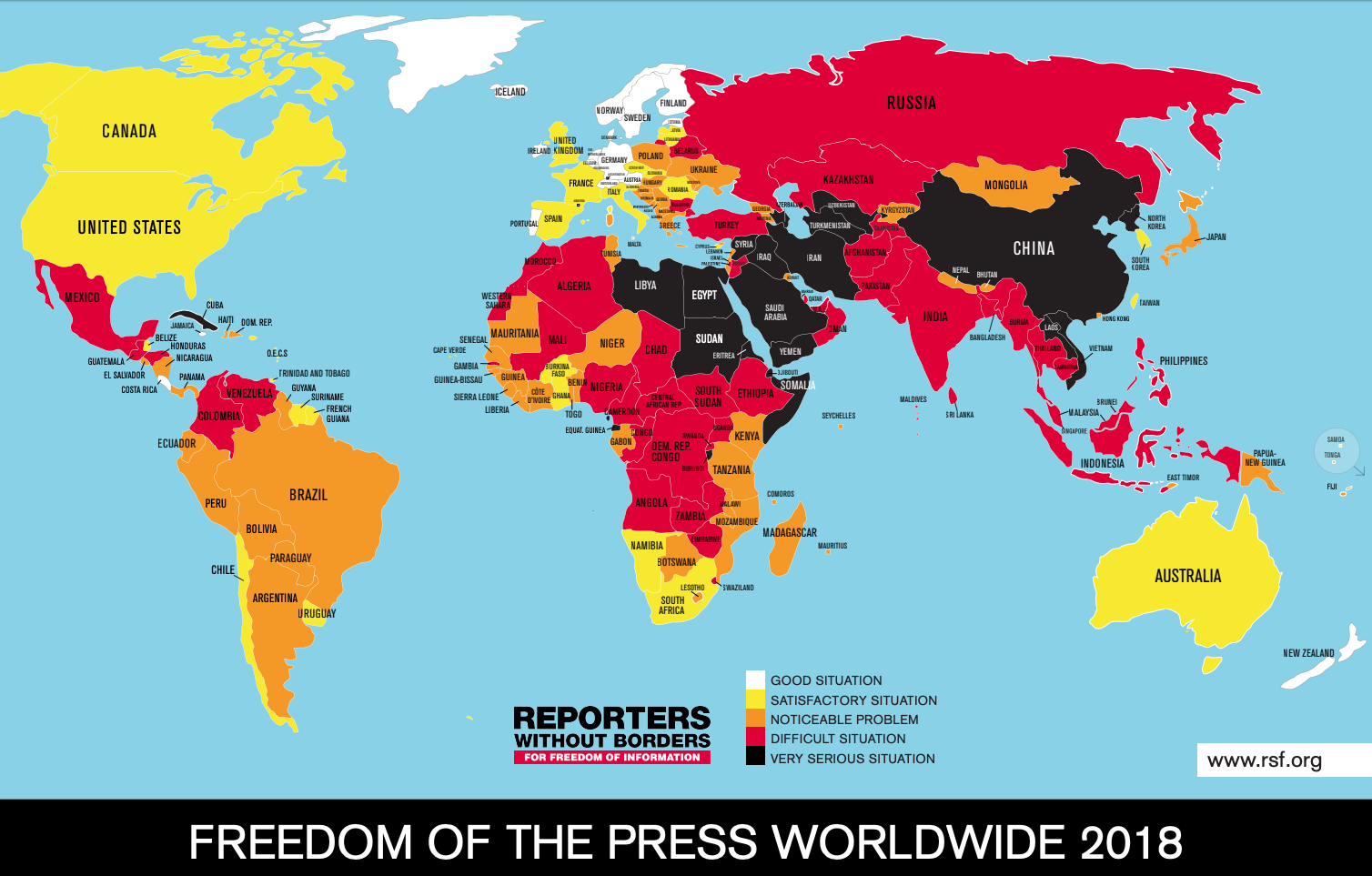 On the other hand, a country like the United States – traditionally known for being a safe haven for journalists and a global supporter of press freedom – is now listed among the dangerous countries. The Reporters Without Borders 2018 World Press Freedom Index listed the United States as “one of the deadliest for journalists in 2018.” This is directly linked to the infamous shooting at the Capital Gazette newspaper that killed five people, including four journalists.

As an Egyptian-American international communication scholar with an expertise in Arab media, I will pay special attention to the changes and developments in the Arab world.

Fresh waves of repression in Egypt and Saudi Arabia sustained the global crackdown on press freedom for the third consecutive year.

Although Saudi Arabia has never been a beacon of press freedom and human rights in the Arab world, two new developments particularly worsened the country’s standing this year.

The first is the brutal murder of Khashoggi, which brought about unprecedented global media attention due to the mysterious circumstances surrounding the killing, the initial denial of the Saudi authorities, followed by their gradual confession, as well as the gruesome and shockingly cruel nature of the murder, not to mention the fact that it was committed inside a consulate on foreign soil.

The second is the detention of a number of female women’s rights activists. In 2018, Saudi Arabia stepped up its repression of journalists at home, with at least 16 behind bars. A quarter of these prisoners are females who wrote about women’s rights in the kingdom, including the ban on women driving that was lifted in June. Some of them were allegedly tortured and sexually assaulted, in a clear and unprecedented violation of the social norms in this traditionally conservative country.

In Egypt, which together with Turkey and China constituted the three countries responsible for more than half of the journalists jailed for the third consecutive year, the record of reporters behind bars has risen to 25.

This neatly echoes President Donald J. Trump’s popular criticism of the media and his description of the press, especially outlets that are critical of him, as “fake news.” This has a clear spillover effect on other countries, including Egypt.

Looking into the future, it would be safe to predict two new major threats to press freedom: the lack of international moral leadership and escalating “cyberwars.”

This first threat is especially relevant in light of a number of new developments that have shaken America’s moral authority as a global superpower, which has traditionally been the custodian of press freedom worldwide.

One of these is the challenges American journalists faced at home. They encountered hostile rhetoric, as exemplified in Trump’s accusations that critical media outlets spread “fake news,” in addition to fatal violence, as exemplified in the Maryland newspaper’s shooting incident.

Moreover, eleven journalists were arrested in the U.S. in 2018. Furthermore, over the past year and a half, the Committee to Protect Journalists documented or assisted in the cases of at least seven foreign journalists seeking asylum in the U.S. because of work-related threats at home, who were held in prolonged detention by U.S. Immigration and Customs Enforcement.

Another challenge to America’s moral leadership in the realm of press freedom protection has been evident in President Trump’s weak statement on the murder of Khashoggi, which failed to condemn Saudi Crown Prince Mohammad Bin Salman, despite CIA reports confirming his direct involvement.

Similarly, while President Trump has continually pressed Beijing over its trade and technology practices, human rights issues like press freedom and the crackdown in Xinjiang have never been a priority. This sends a chilling message to journalists worldwide that the U.S. will not stand up to autocrats, under an administration that puts economic interests above human rights and freedom of the press.

The second threat to press freedom moving forward is the tug of war between regimes and their opponents, which is currently shifting to the realm of cyberspace, in what has been commonly referred to as “cyberwars.” This opens new horizons for both liberation and repression simultaneously.

While it is obvious that many journalists can resort to online platforms to express their views outside state control and governmental intervention, it is equally obvious that many of these regimes are also building their own learning curve, in terms of inventing new measures to crack down on their opponents, not just on the ground, but also online, using techniques such as trolling, hacking, blocking, and sabotaging.

All of this poses new dangers, threats, and challenges both to those who are practicing journalism as well as to those who are trying to protect them, which, in turn, necessitates adopting new innovative measures and techniques on their part.

As this tug of war between regimes and their opponents continues to develop and escalate in future years, both on the ground and online, both parties will sharpen their tools in launching attacks and counterattacks. The effectiveness of each party, or its ultimate success, will always be a product of a myriad of complex factors, which will keep unfolding in the year 2019 and beyond.

Disclaimer: The views and opinions expressed here are those of the author and do not necessarily reflect the editorial position of The Globe Post.
Share28Tweet

Associate Professor in the Department of Communication at the University of Maryland. She is an expert on Arab and Muslim media, interfaith activist, public speaker, and radio host. Contact her @skhamis